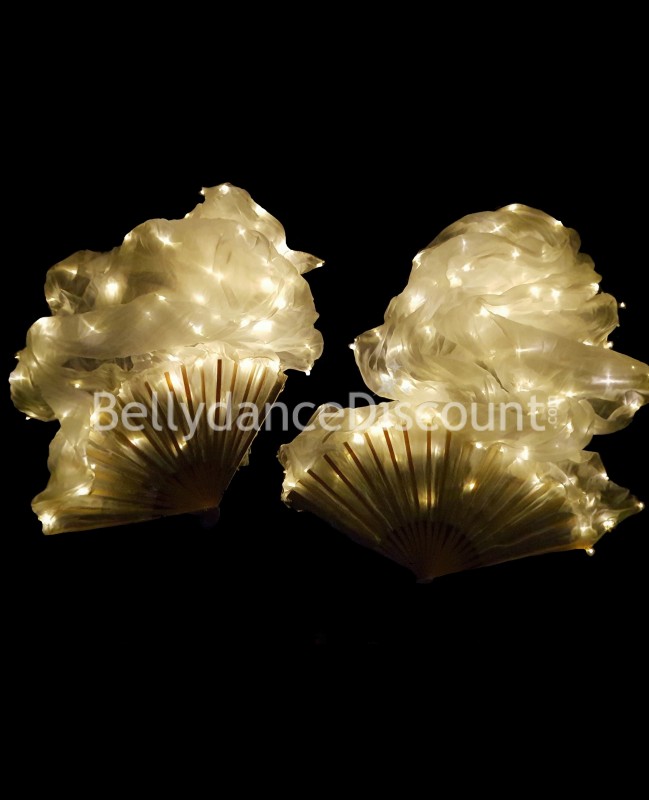 To add value and a touch of wonder to your galas, choose this beautiful pair of light-up Oriental dance fans!
Pair of 100% silk Bellydance fans, one for the right hand and the other for the left one.

The fine and light pure silk material is fixed on a structure made of bamboo. An electrical circuit equipped with 90 LEDs is on each fan (so 180 LEDs altogether).
Fine, light, and discreet, it guarantees the fans' fluidity and volatility and a magical rendering. No electrical cable connects the two fans which can then be used alone. The fans turn on and off very easily using a transparent box found at the end of the bamboo structure, just press on it with the finger. With each push and even during the same choreography, you can modify the light rendering since 8 modes are offered: fixed lights + 7 different blinking modes. Works with 3 AA batteries not included.

Dimensions of the silk on each fan: 180 cm X 90 cm
Diameter of the bamboo structure: 57 cm

Impress your audience, diversify your galas, surprise and have fun with this beautiful pair of bright Bellydance fans with an amazing looks!

Trust your purchase... Comparison between this model of fans and our other light-up fans at a higher price:

The + : Possibility to vary the lighting modes (8 different ones), the fixed electric circuit being less static, the fans can be folded (carefully however)

The - : Less discreet and static electrical circuit likely to get mixed up sometimes, the weight of each box and the weight of the 3 batteries on each fan weigh down the bamboo structure and makes handling complicated, the button on the case to change the lighting mode is less accessible and interchangeable during a choregraphy, the total number of LEDs is smaller and the distribution less balanced (almost no LEDs on the bamboo structure with most of them on the veil).
Complete your dance outfit


Your remarks & comments (0)
No customer reviews for the moment.

Are you sure that you want to report this comment?

Your report has been submitted and will be considered by a moderator.

error Your report cannot be sent

Your comment has been submitted and will be available once approved by a moderator.

error Your review cannot be sent