You’re one of the most famous Oriental dancers in France, what’s your background? 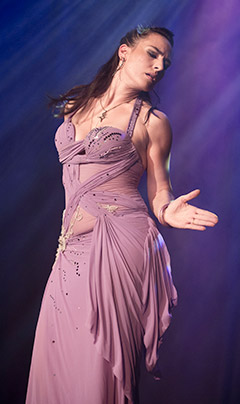 My oldest memory, probably one of my first contacts with dance, is an African dance workshop: I was 4, I went with my mom. I still have in mind the image of percussionists! This meeting must have been quite decisive, without looking like... Then I practiced rhythmic, then jazz, then classical dancing. I grew up around musicians, of all styles. I also studied music and learned violin at the conservatoire. When, at 17, I went to the first time in Tunisia, I had a real auditive shock, listening to the voices of Fairuz or Abdel Halim. I came back with loads of tapes and the deep desire to keep in touch with this new world.
This trip influenced my arrival at my very first bellydance lesson, with Nadia Messaï, who was teaching at Studio Harmonic. The story of my life as a dancer was only beginning. Very quickly passionate, I made progress and Nadia offered me to fill in in one of her classes when she was pregnant. What an honor! At this time I was the happiest... After this, I wanted to have my own class so I talked to Nadia who pretty much had this speech: "You’re far from being ready, you still have lots to learn, but go ahead, I’ll support you in your process." Let’s say that in 2000, there were less bellydance teachers than today, and many places were immediately attracted by the idea of opening a Bellydance class. Therefore I easily found opportunities. 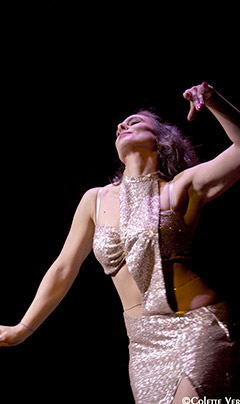 The second important meeting was the one with Leila Haddad, who after a while offered me to join her bellydance company. What an incredible adventure! Leila Haddad taught me so much. From her, I mainly remember her determination, demand, and of course the beauty of her dance.
After having my daughter in 2004, I decided to leave the company to devote myself to my daughter, and also to think about what I really and deeply wanted to do. I decided to train with other bellydance teachers: Myriam Douïou, met in the Leila Haddad company; Lamia Safieddine with whom I mainly worked on the interpretation of songs, because I took Arabic lessons with her; Mayodi, who I really admire and who also welcomed me in her company; Yousry Sharif, who allowed me to rediscover the energy of jazz from my early years and with whom I produced my first CD "Orientally, vol.1"; Beata et Horacio Cifuentes, Raqia Hassan, and many others. I also decided that I had to make myself known a little bit more, and this meant that I had to go through bellydance competitions. So I participated in 3 competitions and each time I finished first: in Berlin in 2007, Turin in 2008, Brussels in 2009. 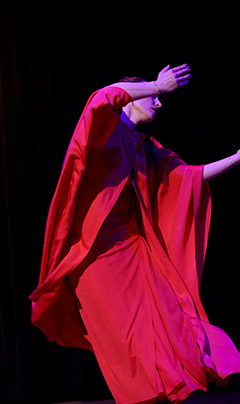 It helped me to be known and invited to some events, in France and abroad. The Turin Competition Prize also allowed me to go to Cairo for the first time at the Ahlan Wa Sahlan Festival. And of course, things happen when you meet new people.
At the Ahlan Wa Sahlan Festival I met Mohamed El Sayed, with whom I worked on my show Ils Dansent... Hourriya. It’s also in Cairo that I met Diana Tarkhan, by taking lessons with her. And later I offered her to join a project I had for a show: "Rendez-Vous", with my friends and colleagues Hind Taoufiq and Lucie Pascalis.
The Khamsin Festival where I was a guest teacher allowed me to meet the percussionist Giorgio Rizzo, with whom I put on a show in Paris. In short, an action starts everything: it is by moving and taking action that things happen, in every sense of the word. It would be too long to explain all the ramifications that were born from these experiences, whether from the competitions, festivals, internships, or shows... the few examples that I gave represent a very small part of all the incredible experiences lived over the past 19 years!

How would you define your own style? 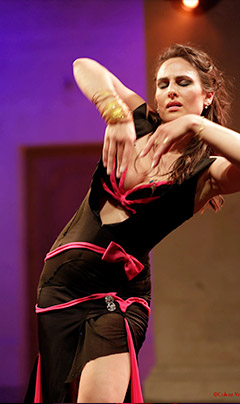 Personal, honest. I’m aware of all my imperfections but I am also very perfectionist and persistent, so it compensates! I work so that my body finds the paths that suit it, but refuses to give in the easiest. Everything that dancing can go without, in other words everything that I believe to be superficial, I prefer to do without. My only interest is the movement. Music and movement. I believe that in order to find your style, the body needs to feel a maximum of things, which is why I challenge it regularly, learning new techniques and dances. Workshops in contemporary dance in recent years have allowed me to consider new possibilities in my interpretations. But again, I don’t force anything: what my body does not want to keep, I don’t try to integrate it at all cost.

What’s the source of your inspiration? 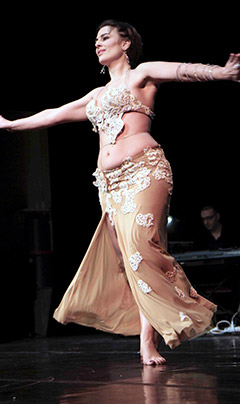 I’m open to everything involves artistic creation, in all areas: I’m inspired by the cinema and of course live shows. James Thierrée’s shows were a real shock! I am convinced that being a spectator really built me, and contributed as much to develop my dance and style as the work I perform, while dancing.
Regarding the world of Bellydance, if I had to mention two oriental dancers I admire, I would say Fifi Abdu and Dina. But among my friends there are are very inspiring dancers, like Sarah Falha, who was also in Leila Haddad’s company. My students also inspire me. With an open mind, we realize how many sources of inspiration there are!

What does the stage bring you? And teaching? 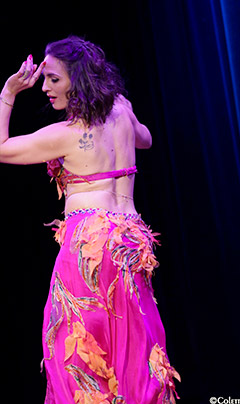 Dancing brings me something, even lots of things, rather the fundamental: life. The stage requires being in the here and now. It is really the place of the current moment. This is the place both rooted in reality and at the same time out of it. The stage is a place where miracles can take place, like a feeling of ecstasy. It does not happen every time, far from it, but when it does, it's huge, incomparable!
With teaching you can understand and be aware of what you do. Having to find the necessary images and words to make my students understand what I want is also an education for me. Teaching has obviously allowed me to move forward and also progress in a dimension that often escapes this dance often approached as a solo dance: the collective dimension. 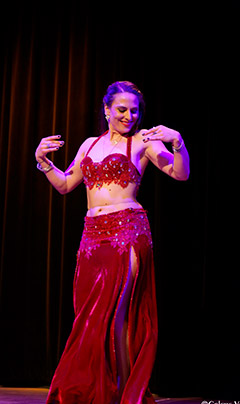 Can a Bellydancer of your stature live from her art?

It’s a question of choice, concession, and context! I am convinced that anything is possible, but this does not mean that everything is possible in reality... Therefore it’s difficult to answer to this question in a general way. As far as I'm concerned, yes, I danced for a living for 18 years, until I had enough because the status of self-employed is not easy to live with.

Did you have to make sacrifices to carry out your career?

I would rather talk of choices once again. In my opinion, the word sacrifice serves more to satisfy one's ego. So yes, I made some very strong choices: stop studying at 20, being in conflict with my family for a decision that seemed crazy, devote an infinite time to dance, and so many other things... 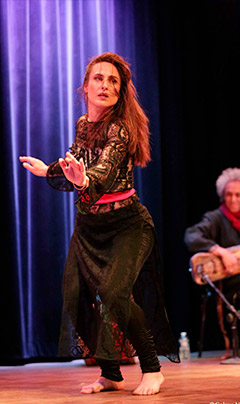 What were you first taken artistically with? And last?

My first favorite, I owe it to my mom: she loved Jérôme Savary, and as a kid, she took me to almost all his shows... Savary was truly the first artistic revelation in my life.
The last one is the creation "Solo", from Philippe Decouflé, seen in Chaillot (Théâtre National de la Danse) In June. Great art, humor, movement, poetry, emotion, there was everything, absolutely everything!

What are your dreams in this field or big projects you still have to accomplish? 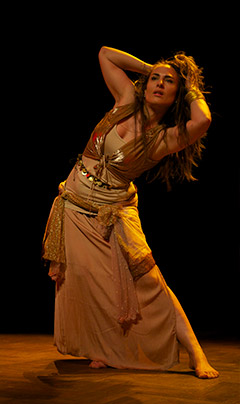 My big project is and will stay to dance, no matter what. Even in pain, with few means, in very small halls! I'm sometimes frustrated to spend time for creations that are to be performed for only one date, maximum two, but when I receive some messages, words following a show describing the effect felt with what I gave on stage, I tell myself that the trace left, however small, is important because it represents emotion. And I firmly believe in the power of emotion, or rather emotions. These are artistic emotions that unveil (to ourselves, others, the world), guide and build us, and nothing can make me happier than knowing that with my art, I can share emotions with the audience.